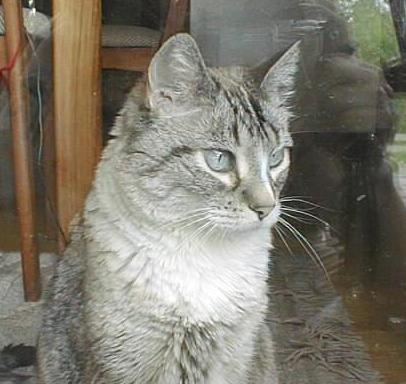 Kiroo was born in a barn near Fort Collins Colorado during early summer of 1987. Her mother was black and white, so the siamese tabby markings must have come from her father. She has always been very shy and retiring. When visitors come to the door, she hides in terror. She assumes that other people eat cats, and so going to the vet has always been terribly stressful for her. Another problem she has is a dietary intolerance, sometime loosely termed a "food allergy". Most foods make her ill, especially foods including beef, chicken or corn. She lives on Iams Lamb and Rice, with occasional tuna treats. Her most serious medical problem is diabetes, which she developed in late 1995. Early indications were that she started to loose weight and for the first time in her life tried to steal food from the trash can. She was starving because she couldn't digest her food. She lost weight alarmingly, and of course was using the litter box more than normal. Her pads started to wrinkle as she became dehydrated. On March 23rd 1996 the problem had finally become obvious enough for us to take her to the vet and get the diagnosis of diabetes.

We started out on Humulin Ultralente, just a few units per day, but it wasn't enough. The vet wanted us to wait a week and do a blood curve in the veterinary hospital every time we changed the dose, but that just wouldn't work. Terror of the hospital sent her blood sugar up, she refused to eat there, and the expense was more than we wanted to spend. We decided to treat her by watching clinical signs. Since she was starving, she ate a huge amount of food, and she needed a proportionately huge amount of insulin to digest it. I explained this to the vet, but they didn't understand. They thought the amount of insulin needed was proportional to the size of the animal, not the amount of food being eaten. 12 units per day is a lot for a 8 pound cat. But she was eating one full cup of food each day, enough for an animal twice her size! I measured the amount of carbohydrate eaten, the amount of sugar excreted (I had a special cat box I could use to collect urine) and the amount of insulin we gave her, and showed that there was a linear relationship between the amount of glucose she absorbed and the amount of insulin she was given. I measured the glucose concentration of the urine, and found it fluctuated a lot, but with the volume measurement I could compute the total quantity. Each unit of insulin corresponded to 2.5 grams of carbohydrate digested. As she gained back her lost weight, she naturally started eating less, and she needed less insulin.

Another problem we had was the prescribed diet. The vet insisted that Kiroo needed Science Diet WD, a special low fat diet for diabetics which was based on chicken and corn. Because of her dietary intolerance, this made her sick. I pointed out that one of the major reasons for the special diet was to encourage weight loss. Since we had been slow about recognizing her disease, Kiroo had lost far too much weight as it was. She did not need a special low calorie diet. What she did need was food she could digest. The vet didn't understand this. I discussed the issue with my sister, Kathy Hinkle, an accomplished vet in her own right, and we agreed the vet's advice made no sense. Our cat was not a textbook case with no complications, and so she could not be given a textbook treatment for diabetes. After a particularly nasty episode involving Kiroo suffering from hypoglycemia, abandoned and ignored at the vet without any food, we fired the vet. For an anxious animal like Kiroo, being forced to swallow some corn syrup in the comfort of home is a much better treatment for hypoglycemia than going to the vet. She never did want to eat there, and eating is the main road away from the precipice for a hypoglycemic cat. Corn syrup worked wonders, but had to be squirted into the back of her throat by force.

After Kiroo gained back her lost weight, we settled in a routine that lasted many years. Generally we gave her 6 units of Ultralente insulin in the evening. We went to one injection per day since that cut the cost of needles in half, and it seemed to work just as well as two. Kiroo settled on eating about a half a cup of food per day, but sometimes she would change, and we'd need to adjust the insulin. She didn't eat much in hot weather. Occasionally we would misjudge the insulin and she'd get slightly hypoglycemic. These episodes were not precisely like I expected, based on descriptions I've read. Generally she'd yowl, vomit, poop out of the box, and start wandering blindly. We'd administer corn syrup orally (a somewhat difficult and sticky job), and she would be better in a few minutes. Treating her has not been difficult for people with full time jobs, and it has not been too expensive. We spent about $120 on her insulin injections per year.

After 7 years of diabetes Kiroo was showing some ill effects, which our veterinarian said was the expected end stage. She'd developed neuropathies in her feet. She couldn't jump well anymore, being both weaker and less coordinated on her feet, and she couldn't retract her claws. Kiroo had been vomiting frequently, especially when she pooped. We started giving her two insulin shots a day, and mixing plenty of mineral oil into her food. She'd developed megacolon, which is a side-effect of diabetes. Being a bit dehydrated all the time made her constipated, and mineral oil was a real life-saver for this problem.

We'd been struggling to decide when to end Kiroo's life, when the pain outweighed the happiness, and we finally selected January 24th, 2005, when we'd both be home. She seemed to be in pain, couldn't get comfortable, and was increasingly unable to do the things she enjoyed, like getting pets and sunbathing. We had an appointment for the vet to come to our house for Kiroo's euthanasia, knowing how much she hated going to the veterinary clinic. But she suddenly fell gravely ill the evening of the 23rd. She seemed to be in a seizure, lying stiffly on her side, unaware of her surroundings, occasionally yowling and kicking. We felt terrible, but there was nothing we could do. There isn't an emergency veterinarian here. We brought her to the vet first thing Monday morning, and ended the suffering. We buried her in a nice sunny spot on our land, near our second-largest juniper tree. She was an important part of our lives for more than 17 years, and we miss her terribly.

Kiroo might have had more adventures in life than most cats, which is illustrated in the pictures below. Most cats don't go backpacking, for example. In truth, Kiroo was not a great hiker. She had to be carried. She liked car camping much more. She's flown East to visit family, and gone on numerous car trips. The names of the pictures below give hints about the timing and location at which they were taken. They are in chronological order. Click on the thumbnails for a larger version. 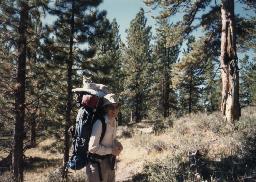 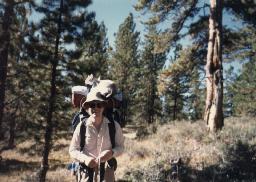 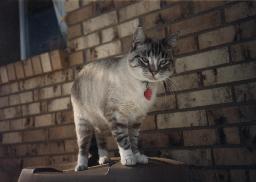 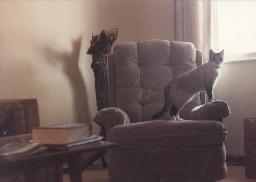 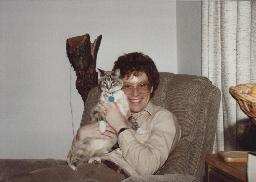 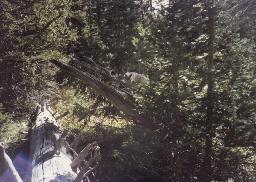 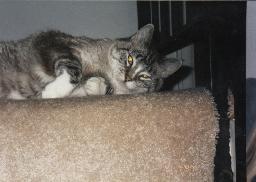 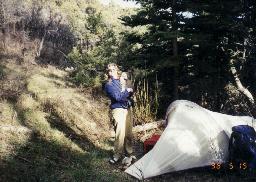 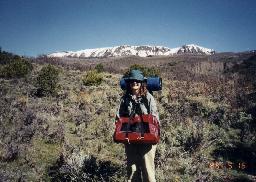 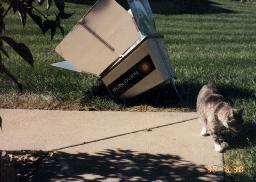 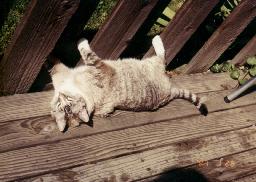 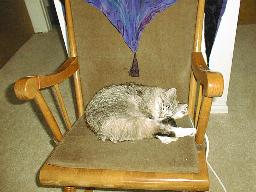 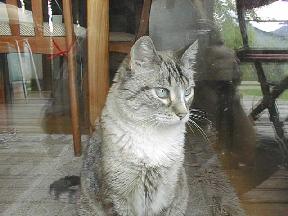 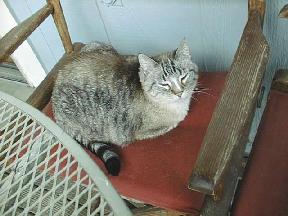 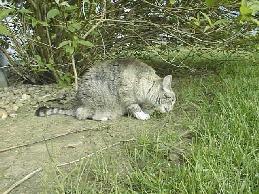 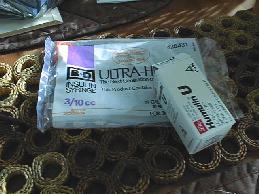 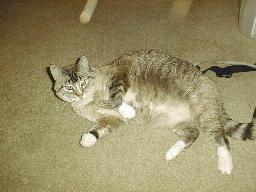 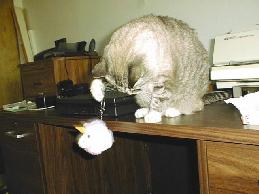 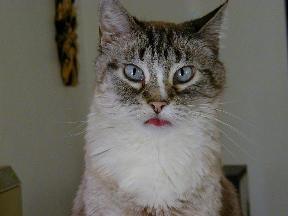 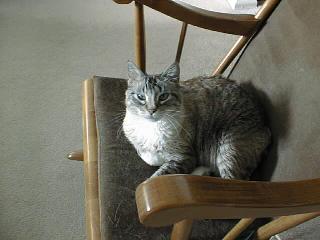 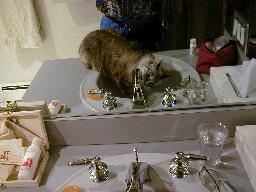 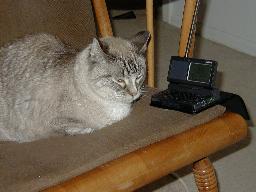 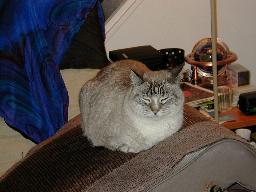 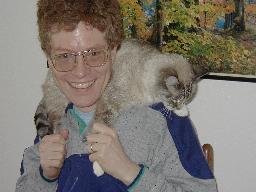 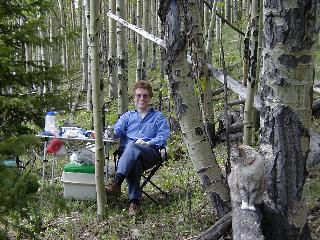 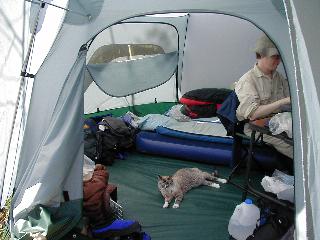 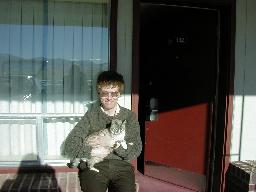 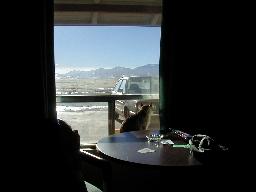 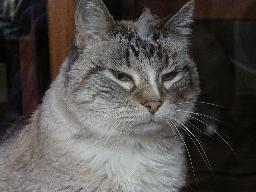